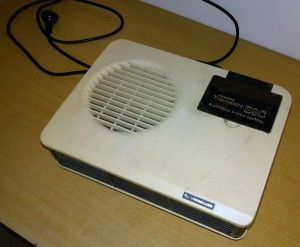 In the winter months, some workers will bring a fan heater to work for some extra warmth. During routine electrical safety testing at a Geelong workplace, we found such a fan heater under a desk that was contaminated with a number of metal staples; several dozen in fact. It was necessary to partially dismantle the appliance to remove all the staples.

When the user was shown this, she said she was always throwing used staples into the bin beneath her desk and sometimes she would miss and the staple would then fall into the intake vent of the heater which was beside the bin. She seemed quite unconcerned about this.

A staple could short out electrical circuits within the heater, causing a fire.

Employees are hired on the basis of their competence in the work they are to perform and not their expertise in electrical safety. While this hazard may be obvious to some people, others have no knowledge of electricity and electrical appliances, and could not imagine that such a situation could be hazardous.

This company was fortunate this was discovered before one of the staples found its way into a location within the heater that would have caused an electrical fire.