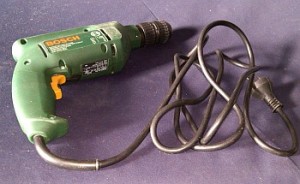 The Managing Director of a company wishing to be shown the operation of a Portable Appliance Tester (PAT) used for testing and tagging, retrieved a power drill from the workshop for the testing.

Subsequent investigation found that in certain rotational positions of the chuck, it became live and thus failed. The chuck was found to be live over a rotation of 5° out of 360°, making it very unlikely to have been discovered with a standard Insulation Resistance test.

Anybody using it would have been inadvertently playing Russian roulette.